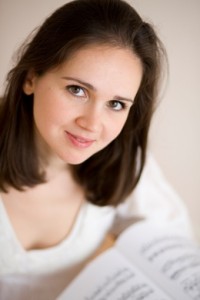 In June 2013 Vesna Dimcevska has completed her eduction as a master of arts, working with Frank van der Laar at the Artez conservatory in Zwolle, The Netherlands. In January 2012 she won the audience prize of the “Grachtenfestival Conservatorium Concours” in Amsterdam, and she was invited to play a solo recital at the Grachtenfestival in August 2012.

Since 2014 Vesna teaches at ArtEZ Conservatory in Zwolle (the Netherlands), where she works as piano accompanist with the Young Talent Class.  She is also private piano teacher.

At the National Conservatory in Toulouse, France, she specialised at accompaniment and developed her passion for the Lied and Melody repertoire. She worked with, a.o. Nino Pavlenishvili, Anne Grapotte en Susan Manoff At the Academy for Mélodie Française for singers and pianists in Toulouse.

Vesna performed as a soloist with the State Orchestra in Sofia and played solo- and chamber music recitals in Macedonia, Serbia, Bulgaria, France and The Netherlands. She was also invited to play at various festivals, among which “Carré d’As” in Chartres, “Nuits musicale” in Armagnac, “Espace Croix Baragnon” in Toulouse en het “Ohridsko Leto Festival”.

With her brother, violinist Gjorgi Dimcevski, she recorded an album with recital works by a.o. Grieg, Tschaïkovsky and Sarasate. Together with mezzo soprano Sara Klein Horsman she gives recitals with Lied and Opera repertoire, coached by Rudolf Jansen.